Posted on Aug 23, 2016
Chantal and I are thrilled to introduce Vanessa Olorenshaw's new book Liberating Motherhood - The birth of the Purple Stockings Movement. We believe in the power of manifestation and are certain that we called this awesome book into being! We've been ranting, praying, and doing rain dances for this very book to be written and published for many, many years. Even waaayyyy before I started joining in on the ceremonies Chantal was speaking with anyone who would listen about how motherhood and empowerment around birthing choices and support for breastfeeding were feminist issues.

Olorenshaw has jumped at the perfect moment, the dawn of a fourth-wave mom/boho/sacred-feminine/feminism movement that is really starting to gain momentum worldwide. Perhaps this wave will finally have the distance from the societal context, out of which First Wave Feminism was born, to begin repairing the phenomenon of the Cis woman's capacity to become mothers. Bringing feminism to a needed state where women don't have to act as if they are men to enjoy equity. 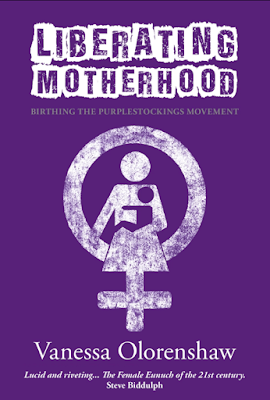 This excerpt from an article she wrote for discoversociety.org gives a great intro on the timeliness of this book.

After all, when jobs are being lost to automation; when wealth is accumulating in the 1%; when the workplace increasingly encroaches on family life; and when women remain at higher risk of poverty because they have cared for their families, feminism has to start to ask itself: are we ever going to find creative ways to protect, support and empower women beyond simply pushing for paid employment? We must start to recover some of the intellectual and creative verve of the original women’s movement: we have to return to discussing redistribution of wealth and the fair organisation of labour. The fact is, many mothers remain trapped by the market either as workers or as unwaged carers. We need to find ways to value care, to support carers, and put money into the pockets of those who sustain and nourish the human race. Mothers.

Huge amount of gratitude to Olorenshaw for fulfilling on this cultural need for an upgraded conversation on mothering and feminism and for making our dreams come true!
Get your copy on September 23, 2016 at Womancraft Publishing!